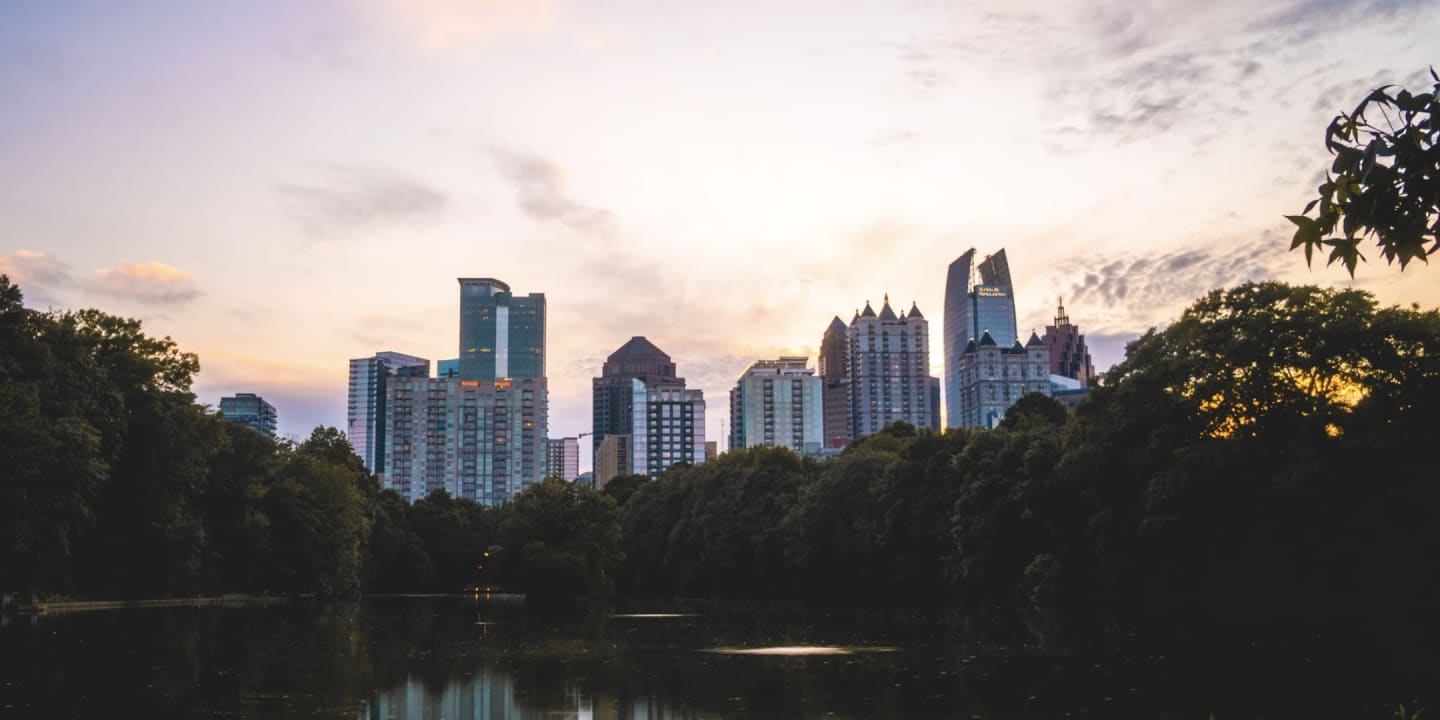 Atlanta: A guide to short-term rentals

Atlanta is deeply steeped in American history while also a melting pot filled with delicious examples of the world's cuisines. A short-term rental here is the best way to explore all of Atlanta's many faces.

With short-term rentals in both the bustling downtown and in Buckhead, Kasa offers comfortable and convenient acocmmodations no matter what brings you to Atlanta or wherever you need to go.

After booking your short-term rental in Atlanta, here's everything you need to know for your trip.

Located in Fulton County in northwestern Georgia, Atlanta and its metropolitan area is home to more than 6 million people. It’s nestled in the foothills of the Blue Ridge mountains, making it among the highest major cities in the eastern United States, at a varying altitude of around 1,000 feet above sea level. The Chattahoochee River, which forms part of the Georgia-Alabama border, lies just north of the city. Before the city came to exist, the region was home to the indigenous Creek people, though they were forced out of the area in 1821. In the 1830s, it became the terminus of a rail line connecting the port of Savannah to the Midwest, and settlers soon followed, ultimately naming the new town “Terminus.” After brief periods as both “Thrashersville” and “Marthasville,” “Atlanta” as a name was suggested, from the Greek for “secure and immovable.” It became incorporated as a U.S. city in 1847. As the population grew and the Civil War unfolded, many major battles were fought near Atlanta. In 1864, after capturing the city, the Union Army ordered it to be evacuated and destroyed, and an estimated 40 percent of the city—-including all its major industrial neighborhoods—-was burned to the ground. The period of rebuilding brought hundreds of thousands of new citizens to Atlanta, a city that hoped to define itself with modern industries like education and technology. After decades of racial aggression by white people toward African Americans in Atlanta, the city became a major hub for the American Civil Rights movement, and was the birthplace of movement leader Dr. Martin Luther King Jr. By 1970, Black people maintained a majority of the city’s population. Today, the city is still a major transportation center, but it has evolved into an urban metropolis, becoming a hub for education, arts, culture, and medicine and featuring great short-term rentals options near it all.

The primary airport in Atlanta is the Hartsfield–Jackson Atlanta International Airport (ATL), just 7 miles south of the city’s downtown area. It is the primary hub for Delta Airlines, and for more than 20 years, from 1998 to 2019, it was the busiest airport in the entire world. While it is only a short drive from the city, the airport is easily accessible on the city’s rapid rail line, called MARTA, which consists of four lines: Red, Blue, Green, and Gold. Some lines are below ground, and others elevated, but all lines run through the centrally located Five Points station, in the heart of the Downtown Atlanta neighborhood and home to many short-term rentals. There is also a modern streetcar that makes a 2.7-mile loop around this neighborhood, and a bus system that features 110 expanded routes across the city and its surrounds. Fares for all MARTA transportation can be purchased at any rail station as a Breeze Card, which is reloadable and reusable. Taxis and rideshares are also readily available throughout the city.

One of Atlanta’s most iconic attractions is the Georgia Aquarium, the largest aquarium in the western hemisphere, with thousands of marine animals across seven galleries in tanks containing more than 10 million gallons of water. It’s also the only aquarium outside of Asia that can boast a whale shark as part of its collection, the largest species of fish living today, as well as 12-foot-wide manta rays, bottlenose dolphins, and beluga whales.

Just around the corner from the aquarium is the National Center for Civil and Human Rights, which opened in 2014 and explores the legacy of civil rights achievements in the U.S. and across the world. In its galleries you’ll find letters and papers of Dr. Martin Luther King Jr. (such as drafts of “Letter from a Birmingham Jail”) as well as an interactive exhibit that explores the real-life effects of segregation in the United States under Jim Crow laws.

In the heart of Downtown Atlanta, the 22-acre Centennial Olympic Park was the former site of the 1996 Olympic Summer Games. It’s easily walkable from several of the city’s major institutions, and features the interactive Fountain of Rings water sculpture, as well as public art installations and abundant green space. On Wednesday evenings in the summer months you can catch free live music in the park as part of the Wednesday WindDown concert series.

Baseball fans won’t want to miss an Atlanta Braves game at Truist Park, from April to October. Before the game, grab a meal, do some shopping, and try out the batting cages at the Battery Atlanta, just outside the stadium.

Atlanta’s arts scene comes to life in the Midtown Arts District, located along Peachtree Street between 14th and 17th Street. Here you’ll find the High Museum of Art, the most renowned art museum in the Southeast, and home to more than 17,000 works of art from all over the world. Just across the street, the Museum of Design Atlanta (MODA) is dedicated to the study of design, including architecture, interiors, furniture, and more.

Running across the northern end of the city, Buford Highway is a 10-mile long strip filled with more than a thousand international restaurants and food purveyors, including Bangladeshi, Cantonese, Thai, and Spanish, just to name a few. There’s also the Buford Highway Farmers Market, which is a great source for international produce and specialty ingredients, and the Asian Square Shopping Center, which offers a wide variety of prepared foods and ingredients from across Asia, like Vietnamese banh mi and Korean barbecue.

Ponce City Food Market is another can’t-miss food destination in Atlanta. It’s located in the Old Fourth Ward neighborhood, near the city’s downtown, and features dozens of award-winning food vendors serving up a variety of dishes, both international and local. It’s host to frequent events throughout the year, and there’s even a carnival on the roof, called Skyline Park, which has mini golf, carnival games, and classic boardwalk-inspired bites.

For the best of Atlanta’s fine dining restaurants, head to the Buckhead neighborhood on the city’s north side. It’s a swanky, well-to-do area, known to some as the “Beverly Hills of the South,” with expensive mansions and luxury shopping centers to match, but there’s no denying the neighborhood is home to some of the city’s best restaurants. Treat yourself to a white tablecloth experience at one of the many New American, Italian, or seafood restaurants.

Atlanta has long been a hub for African American arts and culture, and the Village Market at Ponce City Market is a great spot to shop from some of the city’s finest Black-owned small businesses. Created to empower and uplift Black entrepreneurs, the Village Market has worked with hundreds of Black business owners producing everything from organic skincare products and gourmet foods to sustainably sourced apparel and home goods. You’ll find all your favorite brands at Atlantic Station on Atlanta’s Westside. It’s a walkable brick-lined outdoor shopping center with department stores, a movie theater, restaurants, bars, and even an outdoor skating rink in the winter months. In the middle of the shopping center is Central Park, which is often host to a variety of festivals, concerts, and other local events. If you keep following Peachtree Road until you’re just nearing the edge of the city, you’ll find Chamblee, which is home to its very own Antique Row District. This little pocket is home to some of the best antique furniture shops, thrift stores, and vintage booksellers in the Southeast. In the affluent Buckhead neighborhood you’ll find two of the city’s best and biggest shopping malls, Lenox Square and Phipps Plaza. Department stores and designer boutiques abound in these two elegant shopping galleries, complete with vast, airy ceilings, chandeliers, and marble staircases.

Take a self-guided walking tour of Atlanta’s street art scene, starting in the historic Old Fourth Ward neighborhood at the corner of Decatur and Daniel Streets, which is full of eye-popping murals. Move on to Wylie Street in Cabbagetown for a stretch of constantly changing street paintings, and on nearby Memorial Drive and Krog Street in Inman Park. Wrap up in Little Five Points at the corner of Euclid and Washita for even more impressive displays.

About half an hour’s drive from the city, Stone Mountain Park is a sweeping 3,200-acre park surrounding Stone Mountain, the largest piece of exposed granite rock in the entire world. Take a hike around a lake, play some adventure golf, or take the Skyride gondola to the summit, where you can witness an epic laser lights and pyrotechnics show at sundown. Keep your eyes peeled for annual events and festivals year-round.

Piedmont Park is the city’s biggest green space, and is filled with walking trails, playgrounds, tennis courts, a dog park, and a public swimming pool. Many annual events are held here each year in the warmer months, including the Dogwood Festival, Gay Pride, and the Atlanta Jazz Festival. Next to the park is the Atlanta Botanical Garden, a 30-acre garden with a towering conservatory, orchid house, and the Kendeda Canopy Walk, a 40-foot-tall skywalk offering a birds-eye view of the treetops.

The Atlanta BeltLine takes advantage of 22 miles of unused railroad tracks that run around the core of the city, turning them into a multipurpose outdoor space. It’s a popular local spot for joggers and picnicers, and the Art on the BeltLine program has made it home to a variety of public art installations. There are plenty of restaurants and bars with patios that sit right along the BeltLine, so you can pop off for a bite and a drink whenever the feeling strikes. Seasonal events include outdoor yoga classes, a lantern parade, guided hikes, and more. Grab a rental bike from the Atlanta Bicycle Barn and traverse the whole circuit on wheels.

There are more than 55 streets in Atlanta called “Peachtree,” and it likely references the Creek Indian village Standing Peachtree that once occupied the area. Some historians believe it may not even be a peach tree it was named for, but rather that the name was a corruption of “pitch tree,” a reference to the local pine trees.

Atlanta remains to this day the only American city ever destroyed as an act of war. The city was a hub for Confederate resources, but when the Union occupied the city in September 1864, General William Tecumseh Sherman began building up supplies for the Union. He later took his armies out of Atlanta, and ordered the city to be burned to the ground so the Confederacy couldn’t repurpose any of the supplies.

Atlanta resident Margaret Mitchell used to be a reporter for the Atlanta Journal, until an accident brought on a serious ankle injury that kept her off her feet and out of the field. To keep herself amused, she thought she’d try her hand at writing a novel. In 1936, she published “Gone With the Wind,” and won a Pulitzer for it a year later.