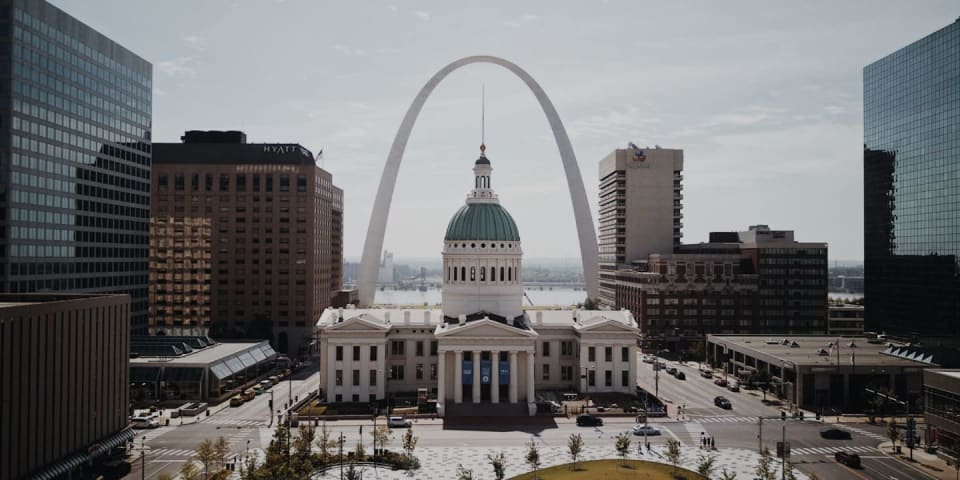 St. Louis offers more food, fun and culture than almost any other city in the U.S., and so much of it right around the corner from Kasa's short-term rentals.

So many of the major museums and institutions in St. Louis are in Forest Park, right near Kasa's short-term rentals—including an 18-hole golf course in the middle of the city!

After booking your short-term rental in St. Louis, here's everything you need to know for your trip.

Nestled along a bend where the Missouri River meets the Mississippi, St. Louis is situated about halfway down the eastern length of the state, just across the river from Illinois. The metropolitan area, which is the largest in Missouri, also includes East St. Louis, which is the second-largest metropolitan area in the state of Illinois. The city was founded by French fur-traders in 1764, but it wasn’t until 1822—almost 20 years after it was acquired in the Louisiana Purchase—that the city became officially incorporated. In the 1840s and ‘50s, thousands of Irish and German immigrants settled in St. Louis, among them Eberhard Anheuser and Adolphus Busch, who revolutionized the beer industry and introduced the world to Budweiser in 1876. A great many Italians also immigrated into the city in the 1890s, settling in a part of town known today as The Hill, famous for its Italian food. In the early 1900s, St. Louis was also a popular destination during the Great Migration for Black Americans from the Deep South.

In 1904 St. Louis was host to both the Summer Olympics and the World’s Fair, and many modern venues originally built for the fair—like the St. Louis Zoo, the St. Louis Art Museum, and the Missouri History Museum—are still in operation today. The St. Louis Cardinals, the city’s beloved major league baseball team since 1892, have won 11 World Series championships, more than any other major league team except the New York Yankees.

Today, the city is home to more than 300,000 St. Louisans and annually brings in more than 25 millions visitors, offering a robust set of high-quality short-term rental options. Here are some of the best things to see and do around the Gateway City.

Most flights into St. Louis fly into STL, or St. Louis Lambert International Airport, just over 10 miles from the heart of the city. The MetroLink light rail, which features a red line and a blue line and typically runs from early in the morning until past midnight, will take you straight from the airport to a number of destinations throughout the city. Single ride or unlimited day passes can be purchased, both of which can also be used on the city’s MetroBus system, which services more areas than the centrally located MetroLink stations. Driving a car is probably the easiest way to get around the city, but be prepared to pay for street parking in downtown areas. Bicycle shares and daily rentals are also available throughout the city, as well as taxi cabs.

St. Louis is perhaps most recognizable for the epic Gateway Arch, a 630-foot-tall monument to America’s western expansion. It also happens to be the tallest man-made monument in the country. Book tickets in advance online to avoid long lines, and supplement your tram ride to the top of the monument with a river cruise that shows off the arch in all its glory.

See the Cardinals play during baseball season at the massive Busch Stadium. Explore the shops and restaurants at Ballpark Village while you’re there.

Beer-lovers will appreciate a free tour of the historic Budweiser brewery, including a behind-the-scenes look at their traditional brewing methods and the natural cave formations the brewers used to store beer before the invention of refrigeration.

The city’s museums and institutions—including the Gateway Arch—are all open to the public free of charge, so you definitely don’t want to miss the St. Louis Zoo, the St. Louis Art Museum, the St. Louis Science Center, and the Missouri History Museum, all just steps from Kasa's short-term rentals.

Visit the Grand Center Arts District for a selection of the city’s greatest galleries, boutique shops, music venues, performance spaces, and fine dining. The neighborhood hosts more than 1500 festivals and arts events each year, so there’s always something new to see.

Much of St. Louis’ culinary fame resides in an area called The Hill, an Italian neighborhood originally settled in the late 1800s. Here, Italy meets the Midwest in the form of toasted ravioli—cheese-stuffed pasta that’s breaded and fried and served with marinara sauce—first made famous by two local mainstays: Mama Campisi’s and Charlie Gitto’s. The Hill is also home to St. Louis pizza: a super-thin-crust pie, light on the tomato sauce and smothered in Provel, a smoky, melty blend of Swiss, provolone, and cheddar cheeses.

If you’re craving something besides Italian, take a culinary tour of the world in the South Grand neighborhood, also known as the International District, where the cuisines of more than a dozen countries-The Philippines, Japan, Vietnam, Iran, and more-are represented in the various restaurants. Visit some of the markets too and bring some international ingredients home with you.

Another St. Louis culinary icon is the gooey butter cake, a rich, sticky confection—heavy on the butter—that you can find at bakeries all across the city. It’s also often a staple at Thanksgiving dinners across the state of Missouri.

For something a little more hip and modern, check out The Grove, a bustling strip of LGBT-friendly bars, shops, restaurants and nightclubs along Manchester Avenue. Craft microbreweries and trendy coffee shops abound in this neighborhood.

If you’re into antiques and vintage stores, check out the Historic Cherokee Antique Row, a six-block strip of independently-owned shops where you can browse for antiques and seek out some unique vintage finds.

Explore the best of St. Louis’ small businesses—some old, some new—in the Maplewood neighborhood. Across just a quarter mile of road, more than 200 businesses are represented here, from doughnut makers and craft brewers to metalsmiths and culinary boutiques. There’s a little something for everyone, especially if you’re looking for fine hand-crafted gifts.

Soulard Farmers Market is one of St. Louis’ oldest traditions. Started in 1779, the market is still open year-round, Wednesday through Saturday. You’ll find local meats, cheeses, bread, and produce, but also a fine selection of imported goods from all sorts of vendors.

For a full-on shopping spree, visit the St. Louis Galleria, a vast shopping mall featuring 165 of the hottest upscale fashion and retail brands.

At 1,371 acres, St. Louis’ Forest Park is one of the largest urban parks in the country. You’ll find more than 7 miles of biking, jogging, and walking trails throughout the park, as well as lakes with boat rentals, and an ice skating rink in the winter. The St. Louis Art Museum, Science Center, Zoo, and the Missouri History Museum are all located within the park, so it’s easy to walk or bike from one destination to another.

For a taste of St. Louis’ historic past, take a stroll through Lafayette Square, the city’s oldest historic district which boasts dozens of carefully restored 1850s mansions and the gorgeous Lafayette Park—the oldest city park on the west side of the Mississippi River. Many of the historic homes open up their doors for visitors for two annual events: the Spring Home and Garden Tour in June and the Lafayette Square Holiday Parlor tour in December.

Visit the Missouri Botanical Garden, the oldest botanical garden in the country, with nearly 80 acres of manicured landscapes and lush pathways to wander through. While you’re there, take a walk through the Climatron, a vast climate-controlled geodesic dome filled with waterfalls, rocky cliffs, and more than 1,400 species of plants and birds from tropical rainforests.

Composer Scott Joplin, also known as the King of Ragtime, started his career in St. Louis, as did Josephine Baker, who performed regularly in the city before transporting her career to Paris. The city’s historic love for blues and jazz still lives on today in dozens of performance spaces and music venues.

St. Louis is home to Sumner High School, the first high school for African-Americans west of the Mississippi, and its famous attendees include tennis pro Arthur Ashe as well as rock-and-roll legends Chuck Berry and Tina Turner.