<iframe src="https://www.googletagmanager.com/ns.html?id=GTM-MR35GFT" height="0" width="0" style="display:none;visibility:hidden"></iframe>For full functionality of this page it is necessary to enable JavaScript. Here are the <a href="http://www.enable-javascript.com" target="_blank">instructions how to enable JavaScript in your web browser</a> 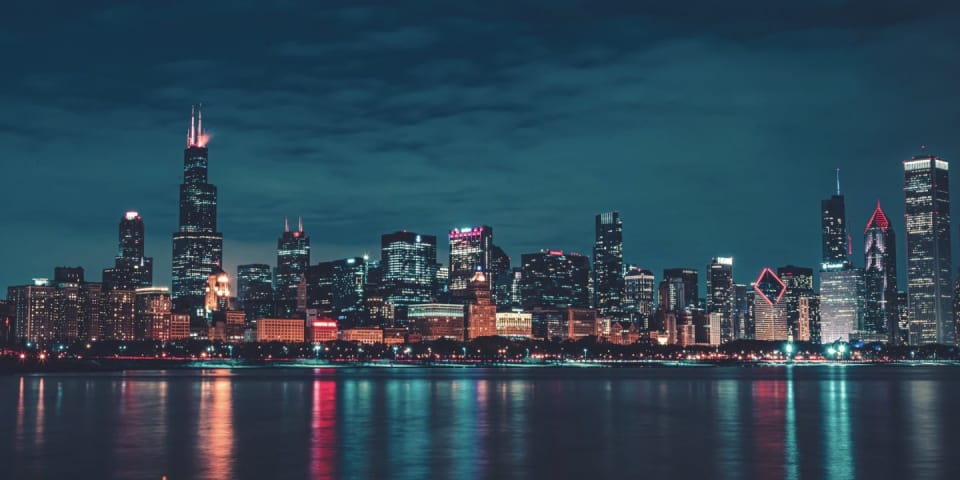 Chicago: A guide to short-term rentals

From its world-class museums, one-of-a-kind skyline, all the way to its famed deep dish pizza, everything about Chicago is grand but exceptionally welcoming. Grab a short-term rental and see what the Windy City is all about.

Both inside the Loop and out, our short-term rentals in Chicago are near all the things you want them to be near. Restaurants, sports, shopping--you name it, you can walk to it.

After booking your short-term rental in Chicago, here's everything you need to know for your trip.

Hugging the southwestern shore of Lake Michigan, Chicago is America’s third most populous city, and the largest in the Midwest, with an estimated population of around 2.7 million. It was first settled in the 1780s by Jean Baptiste Point du Sable, a French-Haitian explorer, but wouldn’t officially become a U.S. city until 1837, after a series of wars and treaties among the United States and the Indigenous tribes that occupied the area. The Chicago Portage, a direct throughway from the Great Lakes to the Mississippi River, made the city an efficient location for trade and transportation.

As manufacturing and finance in Chicago boosted the national economy, congressman Abraham Lincoln was nominated for the Presidency there. In 1871, the Great Chicago Fire decimated about 4 square miles of the city, launching a renewed period of growth, ultimately leading to the building of the world’s first steel-skeleton skyscraper in 1885, a modern marvel then at ten stories tall. As the city expanded, it became America’s foremost rail hub, and U.S. time zones as we know them today were established there as a way to help keep cross-country trains on schedule.

The turn of the century brought immigrants to Chicago from a great many European countries, most notably Germany, Ireland, Poland, and what was formerly Czechoslovakia. In the early 1900s, the Great Migration brought hundreds of thousands of African Americans up from the South, leading to the Chicago Black Renaissance. In the 1960s, the Chicago Freedom Movement, led by Dr. Martin Luther King, Jr., sought to increase fair access for housing, jobs, and education among African Americans.

Today, the city is known for its grand architecture and infrastructure, gorgeous lakefront, first-class museums, and an evolving food scene all just a few blocks from Kasa's short-term rentals. The summers in the city are warm and inviting—-with miles of public beaches to explore-—but it earns its reputation as the Windy City in the winter, when the temperature drops and the cozy factor steps up.

Chicago is serviced by two main airports, O’Hare International Airport (ORD) and Midway International Airport (MDW). Both are major airline hubs today, though Midway was the city’s main airport until O’Hare opened in 1955. A decade after opening, O’Hare became the busiest airport in the world, and kept that title for more than 30 years. ORD is about 14 miles northwest of Chicago’s downtown area, and MDW is about 8 miles south. Both airports are easily accessible via the Chicago Transit Authority (CTA) train line, known as the “L.” The Blue line goes direct to ORD and the Orange line goes direct to MDW, though there are also abundant taxi and rideshare options at both airports.

Once you’re in Chicago, it is relatively easy to navigate the city’s grid system from the steps of your short-term rental, with Madison Street dividing the city into north and south, and State Street dividing the city into east and west. The “L” train, called such for the fact that many of the trains are “elevated,” features 8 interconnecting lines organized by color that can reach across the entire city. 129 bus routes can also help you access parts of the city farther away from the train stations. The easiest way to ride the train and the bus is with a Ventra card, which is reloadable, and available for purchase at all train stations. You can also download the Ventra app to track schedules for the trains and buses.

You can also get around via the Chicago Water Taxi and the Shoreline Water Taxi, which can take you to various points along the Chicago River and Lake Michigan, and also make for excellent sightseeing. Abundant protected bike lanes and a bike share program make getting around by bicycle affordable and easy as well. Just download the app, called Divvy, to gain 24/7 access to over 580 bike stations city-wide.

In the heart of the city’s downtown Loop area, the 319-acre Grant Park runs along the sparkling turquoise shores of Lake Michigan. In its northwestern corner, Millennial Park takes up just a small percentage of the park, but is home to some of the city’s most iconic attractions. Anish Kapoor’s reflective sculpture Cloud Gate, perhaps known better as “The Bean,” is on display here, as is the interactive Crown Fountain installation by Jaume Plensa, featuring giant water-spewing towers illuminated with images of faces. There’s also Lurie Garden, a beautiful stretch of native plants and flowers where you can cozy up on a bench with a book or do some people-watching. Keep an eye out for outdoor movie nights, concerts, and other events throughout the year. Some of the city’s—and the country’s—greatest museums are all within close proximity to Grant Park. See famous paintings such as Georges Seurat’s A Sunday on La Grande Jatte or Edward Hopper’s Nighthawks at The Art Institute of Chicago, and get a glimpse of Sue, the world’s best-preserved Tyrannosaurus rex, at the Field Museum. The celebrated Shedd Aquarium is home to more than 32,000 animals, and the extraordinary Adler Planetarium, with three theaters and a number of space exploration exhibits, is the oldest planetarium in the Western Hemisphere. Formerly known as the Sears Tower, the Willis Tower was once the tallest skyscraper in the world, taking the record in 1974 from the original World Trade Center buildings in New York City. Take a trip up to the observation deck on the 103rd floor and step out into The Ledge—if you’re brave enough. The completely clear glass-enclosed box juts out of the building, suspended more than 1,300 feet in the air. Chicago is a mecca for sports fans: Baseball lovers wouldn’t want to miss a trip to the famous Wrigley Field, home of the Cubs, or Guaranteed Rate Field, home of the White Sox. If basketball is more your speed, the United Center definitely merits a visit too, home of the six-time NBA World Champion Chicago Bulls and an iconic slam-dunking bronze statue of Air Jordan himself.

No Chicago food is more polarizing—and more delicious—than the city’s famous deep dish pizza. Baked in a tall, round pan, its high edges create a huge well for chunky tomato sauce and mozzarella cheese to commingle. Since it takes so long to bake, the toppings are all arranged underneath the sauce, to prevent anything from burning in the oven. Speaking of pizza, keep an eye out for the other Chicago-style pie worth trying, which features a super thin cracker-like crust, and is always cut into squares. Hot dog stands are quintessentially Chicago, and there’s a very specific formula for a Chicago-style hot dog, often described as “dragged through the garden” for its sheer variety of toppings. While there are still plenty of variations across the city, most Chicago dogs feature an all-beef hot dog on a poppy seed bun topped with onions, pickle relish, a pickle spear, tomato slices, pickled peppers, celery salt, and mustard. Ketchup is conspicuously absent among Chicago dog purists, and many vendors don’t even offer it. For some of the city’s hippest bars and restaurants, head to the neighborhoods of Wicker Park and Logan Square, just northwest of the downtown Loop. You’ll find farm-to-table spots with outdoor patios and eclectic cocktail bars serving up frozen negronis, street-style tacos, and chicken tikka masala French fries, just to name a few. From May to October, visit the seasonal farmers’ market each week at Daley Plaza, located in the downtown Loop. Grab lunch from one of the prepared food vendors and bring it to nearby Millennial Park for a picnic, or take a stroll among the booths to seek out the city’s best baked goods, local produce, and flower arrangements.

For a high-end shopping experience unique to Chicago, take a stroll down The Magnificent Mile, the northernmost strip of Michigan Avenue. In the city’s River North neighborhood, these several blocks are home to the best of luxury retailers, from fine furniture and designer clothes to boutique jewelers and specialty foods. If you’re after something more eclectic, visit Clark Street in Andersonville, a neighborhood known for its array of quaint restaurants and locally-owned businesses. The Galleria features three floors of local vendors and craftspeople selling their wares—many of them handmade—and is a great spot to look for a unique gift to bring home. Elsewhere along Clark Street you’ll find stores selling crystals, comic books, antiques, vintage jewelry, and more. Spend some time exploring the Lakeview neighborhood too, just north of Lincoln Park. This area actually includes a few neighborhoods: East Lakeview, Central Lakeview, Wrigleyville, and Boystown, which also happens to be the city’s LGBTQ+ epicenter. Here you’ll find bustling bars and clubs, neighborhood restaurants, and boutiques selling everything from records to locally-roasted coffee.

Reaching more than half a mile out into Lake Michigan, the massive Navy Pier is a neighborhood in its own right. Originally built in 1916, today the pier is full of shops, restaurants, museums, and an iconic 200-foot-tall ferris wheel, making it a great family-friendly destination year-round.

The 606 is a 2.7-mile-long elevated park built along the former Bloomingdale rail line and connects Chicago’s Humboldt Park, Logan Square, Bucktown, and Wicker Park neighborhoods. Since it opened in 2015, it’s been a popular destination for walkers, joggers, and bikers, and is full of little green areas to unroll a blanket and hang out for a while. It’s also a great space to scope out some public art.

Flanked by the Chicago and the Calumet Rivers, as well as Lake Michigan, Chicago is full of opportunities to spend some time on the water. Take an Architecture River Cruise for a tour of the city’s finest and most interesting buildings, or take a Shoreline Cruise and make your way down Chicago’s 28-mile-long lake front. In the summertime, visit any of the city’s 28 free public beaches for a sunny swim in the salt-free waters of Lake Michigan.

You can easily spend an entire day wandering the trails in Lincoln Park, Chicago’s largest green space, located on the city’s north side. At 1,208 acres, it’s 30% larger than New York City’s Central Park, and is also home to museums, monuments, beaches, driving ranges, baseball fields, and the Lincoln Park Zoo.

“Chicago” is actually derived from “shikaakwa,” which refers to a type of wild onion or garlic in the indigenous Miami-Illinois language. You might know it better as ramps, the foraged garlicky green that shows up on seasonal restaurant menus and in farmers’ markets across the country each spring.

The Hostess Twinkie was invented in Chicago in 1930, and actually featured a banana-flavored cream filling at first. During World War II, however, bananas became harder to get a hold of in the city, and the banana cream was replaced with vanilla.

The Chicago River is the only river in the world that runs backwards—and it was engineered that way for a reason. Originally, the river flowed into Lake Michigan, but citizens grew wary of all the pollutants flowing into their clean drinking water. A canal was built in 1900, that got deeper the farther west it went, encouraging the river to flow westward instead. It’s still considered one of the greatest engineering marvels of its time.